In many cultures, collecting daily water for the family falls under the job description of women or girls. In Afghanistan, this entails a hike of two or more miles in harsh winter conditions up and down a mountainside. In Nepal, a young girl may miss out on attending school to complete a 4 hour round-trip journey through a forest filled with dangerous animals or worse, human traffickers waiting to kidnap a young girl. In Africa, collecting water involves walking over a mile through a jungle filled with dangerous animals to a river filled with camel dung.

All of these risks to bring home a bucket of dirty water, filled with germs and bacteria.

GHNI staffer, Jeff Power, recently took a group of Americans to Attir Village, Kenya, Africa. Read Jeff’s below account of the team’s journey to gather water with the women….

“Our team met with village leaders for over an hour in the morning. Then I declared that we wanted to walk with the women for their daily trip to the animal stream, through the bush, in the blazing sun. They were thrilled our team cared, and a small parade of villagers launched out into the bush, leading us.

“It was only after 30 minutes into the walk I learned what added danger to the daily trek — the occasional lion, hyena or cobra. 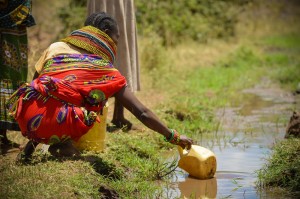 Woman collecting water for her family

“Are you kidding me!!?!!? I asked how often such an encounter occurred. Habiba, our National Leader in Kenya, laughed and said, ‘Only sometimes.’

“Fortunately for us, we didn’t have to face a deadly animal on that walk. But when we reached our destination we were sickened by something just as deadly — a stream of water that trickled through thick layers of animal dung.

“The women all gently moved the top layer of crud off the water, then dipped their scoops into the stream to put water into their 20-litre jerry cans to take back to their families. Some of the women would also put the scoop to their mouth to cool their thirst from the long hot walk. We were visibly shaken.

“That day we promised Attir we would help them immediately learn how to clean their water until we’re able to also help them drill a well in the center of their village. And we will make good on that promise.”

Nearly all the villagers we come alongside do not have running water but we help them find solutions for safe access to clean water for drinking, washing, and cooking.

Don’t wait until December to do your year-end giving. Provide safe, clean water for villagers now!