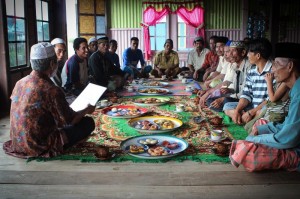 Village leaders discuss how to help their village through this tragedy

For the village of Tanah Keke, understanding Global Hope Network International’s Transformational Community Development concepts have been especially helpful in the past few weeks following a recent disaster.  Known as “the forgotten Island” off of the mainland of Sulawesi, Indonesia, the residents of Tanah Keke have been engaging in TCD training for over a year, transforming their village in many ways.

“On January 9th, one of the most devastating storms in decades hit the island of Tanah Keke. More than 1500 fish and shrimp ponds, the main source of income for the 7000 people living on the island, were destroyed in less than 48 hours. Countless homes were demolished and roofs were ripped off homes like they were doll houses. Tragically, four people traveling to the island drowned when their boat capsized during the storm.

This was the first time I’ve been able to visit in two weeks, since the weather has been far too severe to cross to the island. For the past two days I met with village leaders, discussing how our team might partner with the community to help restore their economic livelihood. Starting in March, our team will work alongside the village to help form ‘work groups’ made up of 3-5 men who will work together to help restore/rebuild their fish and shrimp ponds.”

Not only does GHNI focus on Transformational Community Development but also Disaster Relief.  Fortunately for the people of Tanah Keke, already having embraced the concepts of TCD, their minds are in gear to quickly rebuild their community and to understand that Hope is not lost.

Watch this video on one amazing day of Tanah Keke’s TCD journey: