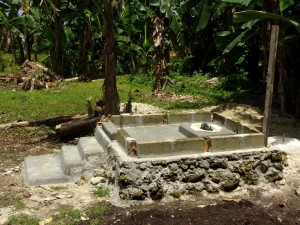 Hygiene and sanitation are often not a part of daily life for many villagers that GHNI works alongside. Toilets are a major element missing in their lives. GHNI-Indonesia has been working closely with Haji Tawang’s village in this aspect of Transformational Community Development (TCD) and wants to share this inspiring story with us.

Tanakeke-Cambaloe Village, Indonesia
“This past month we have seen 7 more toilets built in Cambaloe. Haji Tawang’s is by far the most fancy.

“Some have taken these ideas and expanded on them and made improvements, such as Haji Tawang.

He really wanted to make sure the wall structure was permanent and that it was elevated, so when the rainy season comes the toilet area won’t flood. Haji Tawang does all these improvements on his own as we only provide the concrete rings for the septic pit and the actual ceramic toilet. Haji Tawang provides the cement, rocks, wall materials, and labor.”