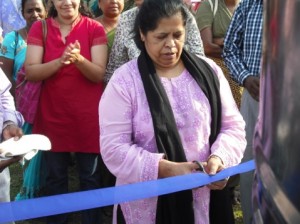 Three wells have recently been bored in the area of Tirpur, India.

To help empower villages Global Hope Network International engages with community members and local leaders. Finding local “Champions” has proven time and time again to be important in the success of on-the-ground projects around the world. One man or woman whom a village looks up to can be the difference between struggle and transformation. Between dire poverty and fresh water.

GHNI staff in Tirpur, India, reported last month about one such man’s influence.

“David Livingston (yes, that really is his name), is a local leader where one of these wells was recently bored.  Though he is sick with a kidney disease, he is very excited to report that this well near his village is being used by over 100 families who were in dire need of clean, fresh abundant water.  His life and the village area where he leads, is crucial in expanding the TCD understanding and especially how GHNI partners with key leaders in the area.”

This is just one simple example of the impact GHNI has had over the past year.  Hopefully we have many more stories to share in 2013!