One small boy lies writhing in pain in his home in a garbage village we work near Cairo, Egypt. He is seriously ill with an ear problem. Cairo is on fire. Shots are heard in the streets all over the city. Churches, youth centers, and government buildings are burning. His parents are emotionally overcome and bewildered.

They hear a knock on the door from a worker of one of GHNI’s partners who has risked his life to come and find the child to take him to the doctor. The doctor, a Christian, has risked his life to come and operate on the child. The operation goes well and the Muslim child is healed in the hands of a doctor who helps all people regardless of their religion.

The doctor navigates his way home through the rubble. Our worker sees that the child is taken back to the garbage village, well and joyful. In the midst of the horror, our worker, a potential target himself of the Brotherhood, quietly find his way home. Another good day has taken place.

Thousands Suffering from Violence and Persecution

It was only a few years ago when members of minority groups, such as Christian workers, were almost never harmed because they so often brought love, reconciliation, and healing to communities. Also in decades past, western powers would seek to help protect the interest of such groups by pressuring hostile regimes into releasing them from prison.

This has changed, especially in the last several years. The human rights of religious leaders like pastors and missionaries hardly seem to be of concern, apart from receiving lip service from western governments.

Now a Pastor in upper Egypt has been kidnapped along with his wife. Many churches in the area have been burned and destroyed. Besides this, thousands of Christians, moderate Muslims, and secular citizens of Egypt have been shot, beaten, imprisoned, threatened, and left homeless. The stories of rape and ransom are too many to recount.

Our Courageous Staff in Egypt Need Your Help 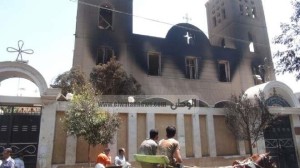 Our staff is still going to the villages we serve, which are the poorest in Egypt. Global Hope Network International has partnered up with organizations like Coffee Without Borders to provide funds, help, and counseling to the many victims. To help them rehabilitate their homes and families, and to provide food and funds to re-start their lives.

All of the profits from Coffee Without Borders go to support Global Hope Network International and their mission to bring help and hope to those hidden and hurting.