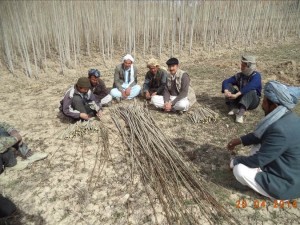 Dividing up cuttings in Bamyan Province

“In Kabul Province, GHNI signed contracts with 3 new farmers who were each given 8,000 cuttings. Next year, GHNI will buy back one set of cuttings from the farmers, and will also be given one set as a way to pay back the loan of the cuttings. In this way, the farmers can earn income from the trees, and also pay back this year’s loan.

“In Bamyan Province, 11 farmers received cuttings, each of different amounts. These are on loan only and next year they will return to GHNI the same number of cuttings they received, but can sell or use the remaining cuttings they obtain from the trees.”

* For purposes of security and well-being, “Valley of Ali” is a pseudonym of the village that is being helped by this project.