Small businesses are struggling, but hope continues to blossom in a Garden 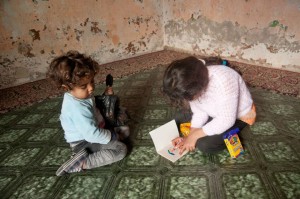 Jalalabad, the provincial capital of Nangahar Province, sits astride the main trade route between Afghanistan and Pakistan where small industrial enterprises which do not have regular electricity supplies are consequently forced to lay off workers or close completely. “There were 115 factories in 2011, but today there are 85 and if there is no electricity it could be reduced more” the local representative of the Afghan Chamber of Commerce told IRIN. “About 600 people have been left jobless by factories shutting down only this year.” The reason for the electricity shortage is that an electricity pylon was destroyed by the Taliban.

GHNI’s Garden of Peace and Hope is Blooming for Expats

“The Manager at the Garden of Peace and Hope is full of ideas for the Garden. At the start of March, he organized an exhibition of Afghan Art for the foreign community. This was a great event and was an ideal opportunity not only to promote young local artists, but also to bring the Garden to the attention of the wider expat community. The Manager also told us that in February a television crew came to the Garden to do an interview and take footage of the work there. We hope to build on these events in the spring and encourage more visitors to the Garden.” GHNI is the founder and manager of the Garden, after it was requested by the office of the President of Afghanistan.

A photo gallery in The Guardian newspaper of indeterminate date describes Ouagadougou as the focal point of human trafficking in West Africa, produced by a combination of corruption in Burkina Faso and more stringent controls in other countries, notably Niger. It tells the familiar story of young girls, in this case mostly from Nigeria, lured abroad by promises of work as maids or even emigration to Europe or the USA. They are then forced into prostitution to pay the debts they allegedly owe to the traffickers. GHNI is now looking to test lessons in rural villagers to warn them of the traffickers.

Through the almost five decades of military rule, the academic standing of Burmese universities sank under the combined pressures of inadequate funding and complete political control. The government plans a private universities bill, which would allow international campuses to be established by foreign universities either jointly owned or wholly owned by the external partner. Although all these developments are as yet unrealized, they do hold the promise of a fundamental change from the past repression of university life.

GHNI, last month, had several staff speaking in higher education schools on the empowerment for change that happens using our community based self-sustainable training or TCD (Transformational Community Development).

Our local TCD Trainer writes, “During the month of February, we welcomed a team from Europe and the US. It was great to work with them and have relationship-building time with them. We were able to welcome them at The Father’s House and check on the progress of this self-sustaining orphanage. Great progress has been made and the children are very happy. It is wonderful to see the healing that has come into their lives after going through the traumatic experience of Cyclone Nargis and the loss of their families.”

The UN Food and Agriculture Organization (FAO) issued a warning in February that there was a risk of desert locust swarms forming in the border regions of southern Egypt and Northern Sudan. Scattered swarms of immature locusts (hoppers) had been found, and the FAO warns all of the countries adjacent to the Red Sea of the possible danger. An association doing community development amongst the rural poor has asked GHNI to teach our TCD program in a number of villages in Southern Egypt.

The 4,000 person population of the village of Fifa in north-western Jordan can tell a story of increasing poverty. Historically, they depended on seasonal agricultural work in the Jordan Valley, sheep breeding, and cash and material assistance from the Ministry of Social Development. But their situation has deteriorated sharply in recent months.

Food prices have risen, partly in response to the disruption of trade with Syria. Charitable assistance has fallen in the wake of the global financial crisis. Most recently, fuel prices rose by 40% when the government withdrew subsidies as a condition of receiving a loan from the IMF. According to IRIN, poorer people can no longer afford to heat their homes. They also eat less and find even casual work hard to get since they are in competition with Syrian refugees who are willing to provide the labour of an entire family for the wages of a single labourer.

GHNI has instituted a very successful Goat Loan Program that loans pregnant female goats to poor families. We also teach the villages self-sustaining lessons with our Transformational Community Development (TCD) programs. One farmer that had no goats now has twelve.

The initial flood of Syrian refugees was largely directed at the north and east of Lebanon, but a disturbing new trend is reported by IRIN. Syrian refugees, who are largely Sunnis, have been increasingly moving to southern Lebanon which is the stronghold of the predominantly Shia Hezbollah, and a long-term ally of Bashir Assad. Aid agencies have only recently started channeling humanitarian aid to the south, and they remain puzzled by the motivations of the new migrants, given the antecedents. One speculation is that the absorption capacity of the north is near exhaustion and therefore there are better prospects of finding jobs in the south. The spillover of the Syrian conflict to violence in Beirut itself may also be a contributing factor.

Caring for Refugees, One Life at a Time

GHNI’s partner in Lebanon is focusing on 200 Syrian Refugee families. The numbers keep growing as do our abilities. Here is one small story from one family. “A man had only one cloak. Since he is so overweight, he can’t walk or leave his apartment. I asked a tailor how I could take his measurements. The tailor will now be able to make him another garment. This may not seem like a big story, but it is to this man. THANK YOU!”

More than two years after the overthrow of the Gaddafi regime, there are still 60,000 IDPs, some held in prisons, some in camps managed by militias which are not under the full control of the national government. The main phase of humanitarian operations closed at the end of 2011. Thus agencies like the World Food Programme, donor organizations like ECHO and international NGOs like Save the Children have pulled out. The main government aid agency, UNHCR continues to maintain a small presence. One of its interventions is training IDP leaders in techniques of negotiation. This will be vital when processes of reconciliation and reintegration get under way. GHNI is hoping to bring a load of wheelchairs there next year if we can get trained personnel to help us fit them to the people who receive them.

The well-intentioned distribution of water pumps in the Northern Province by the government and aid agencies, designed to boost agricultural recovery in the wake of the civil war, has backfired according to scientists reported in IRIN. There are two major problems: the rate of consumption of underground water exceeds the average rate of recharge; and the water pumps are encouraging wasteful use of water, with up to 70% of the water drawn being wasted. While success in boosting incomes has been achieved, the rate of consumption of underground water is unsustainable. There is now an urgent need to put in place water conservation measures. GHNI has helped put in several wells but we also teach water conservation when we establish the community-based committees to run them.

SYRIA
Is There Hope for the Syrians?

The United Nations High Commission for Refugees (UNHCR) estimates that more than a million people have fled the Syrian conflict. But this number appears to reflect only those who have been officially registered as refugees on admission to camps established in the neighbouring countries. Unknown numbers have crossed the border and found refuge in cities, towns and villages with friends, relatives or simply compassionate hosts. These refugees have no external support and no jobs.

In an interview carried on TV Station France 24, a UNHCR spokesman observed that the flow of refugees was increasing rapidly since the turn of the year. Whereas the average number crossing the border throughout 2012 was 3,000 per day, in January this increased to 5,000 per day and in February to 8,000 per day. Services in the refugee camps are being overwhelmed by the numbers seeking help, while NGOs are battling to provide humanitarian assistance inside Syria under multiple constraints.

GHNI continues to bring Help and Hope to refugees. Recently a Syrian woman told our GHNI leaders, “Thank you for coming. We know that there are many organizations who work with Syrians, but we have to go to them, you came to us.”

The following is a list of available statistics estimating the scope of Human Trafficking around the world and within the United States. Actual statistics are often unavailable, and some may be contradictory due to the covert nature of the crime, the invisibility of victims and high levels of under-reporting. Further obstacles include inconsistent definitions, reluctance to share data, and a lack of funding for and standardization of data collection. Particularly lacking are estimates on the number of American citizens trafficked within the U.S.

27 million – Number of people in modern-day slavery across the world.
Source: Kevin Bales of Free the Slaves.

According to the U.S. Department of State’s 2007 Trafficking in Persons Report (TIP Report), estimates vary from 4 to 27 million.

50% – Percent of transnational victims who are children.
Source: U.S. Department of Justice, Report to Congress from Attorney General John Ashcroft on U.S. Government Efforts to Combat Trafficking in Persons in Fiscal Year 2003: 2004.

80% – Percent of transnational victims who are women and girls.
Source: U.S. Department of State, Trafficking in Persons Report: 2007.

70% – Percent of female victims who are trafficked into the commercial sex industry. This means that 30% of female victims are victims of forced labor.
Source: U.S. Department of Justice, Assessment of U.S. Government Activities to Combat Trafficking in Persons: 2004.

$32 billion – Total yearly profits generated by the human trafficking industry.
$15.5 billion is made in industrialized countries.
$9.7 billion in Asia
$13,000 per year generated on average by each “forced laborer.” This number can be as high as $67,200 per victim per year.
Source: ILO, A global alliance against forced labor: 2005.

Foreign Nationals Trafficked into the U.S.